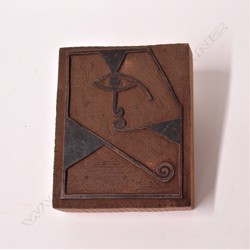 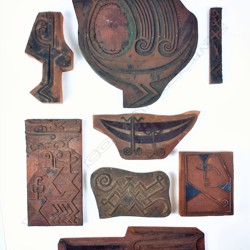 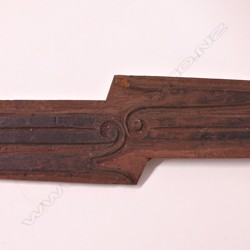 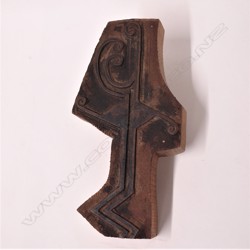 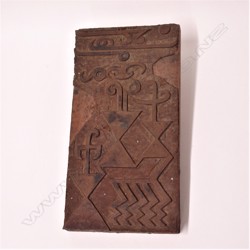 Theo Schoon, set of eight hand carved vintage lino printing blocks, fixed to wooden block backs, c1950's / 1960's. Includes: 1. 'Bird in the Ahuriri Style' 335 x 28 x 318mm. 2. ‘Design in the Ahuriri Style’ 290 x 26 x 127mm. 3. Untitled figure 121 x 48 x 240mm. 4. ‘Spirits and Clouds’ 147 x 25 x 285mm. 5. Untitled complex figure 215 x 26 x 136mm. 6. 'Design in the Opihi River Style' 401 x 18 x 124mm. 7. 'The Eye' 141 x 47 x 170mm. 8. Untitled 207 x 18 x 32mm. Provenance: These blocks were given by Theo to our vendor's father, Peter Andre, a friend and accomplice upon many of Theo's expeditions. Peter, like Theo was of Dutch Indonesian descent. Note: The post war art scene in New Zealand was very insular, Theo's European modernism and fascination in cross cultural themes were of interest to only a few, Gordon Walters was one of them, he was profoundly influenced. We are only recently appreciating the impact that Theo had on New Zealand art. His documenting of Maori rock art in Canterbury was of major importance and forms the basis of inspiration for this set of rare and important lino blocks. Exhibited: 1982 Rotorua Art Gallery 'Theo Schoon, Collected Works' curated by John Perry. In 1982 in my role as Director of the then Rotorua Art Gallery curated an exhibition entitled 'Theo Schoon Collected Works', so successful was the first ever survey show of the then expatriate artist that Theo returned to N.Z. and resided with me in Rotorua. Word of his return soon got around and an old comrade of Theo's with a similar Dutch, Indonesian heritage got in touch informing Theo that the lino blocks Theo had entrusted to him with many years before were still in his possession having been stored up in the cavity of roof of his house for safe keeping for many years. The lino blocks featuring mainly Rock art and Rotorua inspired elements were reunited with Theo. With Theo's authority five of the blocks were given to me to take up to Elam Art School and a very limited number of impressions [5] were made from each block under the watchful eye of Robin Lush a Master Printer at the school. When the print run was completed the blocks were returned to the 'owner' as Theo had no need to own them considering his age and physical condition. A small number of the sets were signed by Theo and given away by Theo. The Rotorua Museum of Art and History has in its permanent collection a full set of the signed prints. As far as Theo was concerned they represented a seminal distillation of his early exploration of Maori rock art and his initial reaction to the geothermal activity he bore witness to in the land of 'sulphur steam' and contemporary thoughts and ideas that were percolating in his mind in the early 1950s That these original lino blocks have survived at all bears testimony to the love, respect and understanding that Peter Andre and his descendants had for Theo Schoon. John Perry.