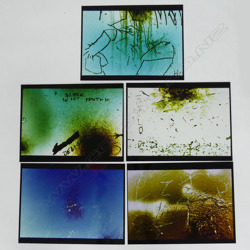 Jack Body (1944-2015) 'Runes (1984)', 15 Cibachrome prints [taken on Kodak vericolour reversal film, the image was then recopied into negative, using the same film, producing bizarre colours], individually signed, dated 1985, numbered and titled verso. The images from part of two commissions: Firstly a 3-screen audio-visual of projected transparencies, with stereo soundtrack of water sounds recorded in toilets, commissioned by the Auckland Art Gallery. Also presented as an installation in a cave-like darkened room, the images as colour photocopies fixed on walls and ceiling, with continuous stereo soundtrack, commissioned by the Wellington City Art Gallery. Body was most well known as a composer and was in 2014 an Arts Foundation of New Zealand Icon Award recipient. Est. $300-600.