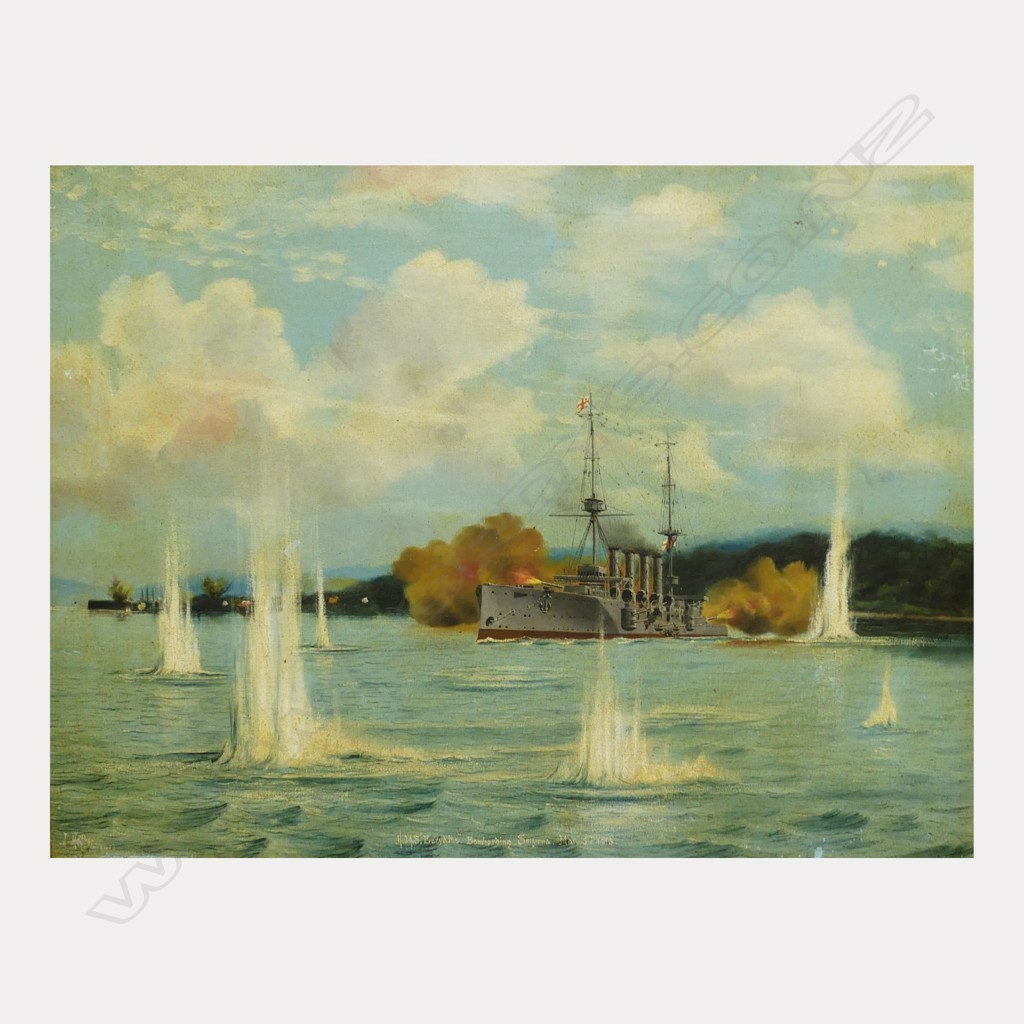 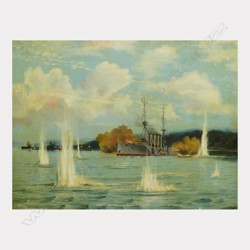 J.H. Heffer, 'H.M.S. ‘Euryalus’ Bombarding Smyrna, Mar. 6th, 1915.', oil on canvas, signed, inscribed lower middle. 670 x 885mm. Note: HMS Euryalus was an armoured cruiser built for the Royal Navy around 1900. She became flagship of the Southern Force defending the eastern end of the English Channel and she was present at the Battle of Heligoland Bight a few weeks after the war began. In early 1915 Euryalus was assigned to support British troops during the Gallipoli Campaign by providing naval gunfire. She covered the landing at Cape Helles in April as well as providing fire support during other British offensives. When the war ended, Euryalus returned home in 1919. The Artist: P/o J.H. Heffer R.N. served on the H.M.S. Euryalus and personally witnessed the paintings he produced. In this way, his works are unique. + The Bombardment of the Turkish Port of Smyrna prior to the Dardanelles Landing at Gallipoli The Ottoman Empire’s largest Mediterranean port, Smyrna (now Izmir), was bombarded on 5 March in an operation similar to the attack on the Dardanelles. The intention was to prevent it being used as a submarine base. The attacking force consisted of the battleships HMS Swiftsure and Triumph, detached from the Dardanelles, the cruiser HMS Euryalus (Vice Admiral Sir Richard Peirse’s flagship), the Russian cruiser Askold, the seaplane carrier Aenne Rickmers and minesweepers. Smyrna was defended by a battery of seven 9.4 inch guns and another of four 6 inch guns, plus minefields that were protected by light guns and searchlights. The action began on 5 March and soon became a smaller version of the Dardanelles. The minefields prevented the big ships from getting close enough to destroy the guns which stopped the minesweepers from clearing the minefields. An attempt was made to persuade the local ruler, the Vali of Smyrna, to come to terms. He appeared to agree, but it was unclear whether or not the military would obey him, especially after British ships flying flags of truce were fired on. The attack was called off on 15 March because the battleships were recalled to the Dardanelles. Ironically, Smyrna could not be used as a submarine base because the Ottomans blocked it by scuttling five ships in order to defend it against the attack.