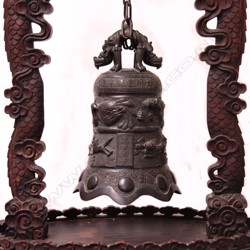 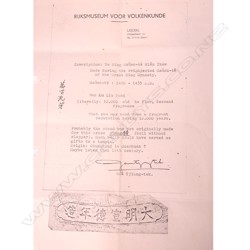 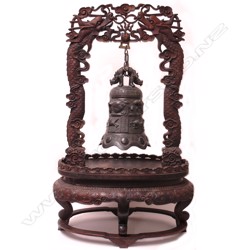 An antique Chinese bronze bell, surmounted with two side by side dragons acting as the suspension hanger, the bell top with horizontal panel enclosing a six character reign mark: ‘Da Ming Xuande Nian Zhu’ (made during the reign period Xuande of the Great Ming dynasty 1426-1435), two encircling bands below of various dragons and animals in relief flank a vertical panel enclosing a four character epithet ‘Wan Gu Liu Fang’ (That you may hand down a unblemished reputation for 10,000 years), the lower scalloped edge with circular bosses; suspended in a wooden stand carved and pierced as two dragons raised upon a platform base with cloud and scroll carved highlights. Bell H.300mm, stand H.795mm. An accompanying certificate from the Rijksmuseum Voor Volkenkunde, Leiden, Netherlands signed by the Curator of Chinese Art in the 1960s/70s Dr Gan Tjiang-tek translates the inscriptions and notes: 'Probably the stand was not originally made for this brass chung (bell without clapper), such bells could have served as gifts to a temple. Origin: Chungking in Szechuan? Maybe later than 15th century'.