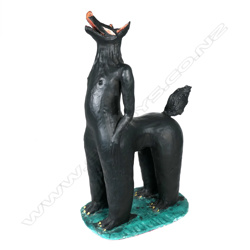 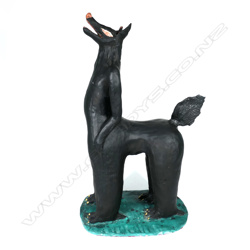 Bronwynne Cornish 'Howl', painted and gilded terracotta. 300 x 480 x 740mm. Provenance: the artist's collection. Exhibited: 'Mudlark: Bronwynne Cornish, Ceramics 1982–2013' (Survey exhibition) MTG Hawke’s Bay, March to August 2014; The Gus Fisher Gallery, Auckland, November to December 2014; The Dowse, Lower Hutt, April to August 2015 (https://dowse.org.nz/exhibitions/detail/bronwynne-cornish-mudlark). $4,000.00 - $8,000.00 Excerpted from Art News New Zealand, Autumn 2014 Profile. (https://www.artnews.co.nz/autumn-2014-profile/) Coming To Terms With Impermanence. In 2008 New Zealand artist Bronwynne Cornish completed a six-week residency at the Sanskriti Foundation in New Delhi, and she too noticed the porous threshold between the sacred and mundane. She was also fascinated by the way human and animal forms – like the deity Ganesha who has the head of an elephant and the body of a human – frequently morph in Hindu mythology. While in Delhi she made two large ceramic sculptures, Howl and Screech, which are strange human-animal hybrids embodying the city’s chaotic energy and eerie nocturnal sounds – the dogs she heard howling at night, fireworks booming during the wedding season and the unearthly shriek of peacocks at dawn. Screech has the body of a dog painted an intense blue, a human torso and the head of a bird. Its sharp beak is open mid-cry and it holds a mysterious lump of gold that looks like a charm or amulet. Much darker more menacing and equally vocal is Howl, a wolf-like creature with a moa’s feet, a sturdy, powerful body and a red gash of a mouth. With her characteristic dash of irreverence and humour, Cornish has given both creatures gilded toenails – an unexpected gaudy detail that would do any Hindu god or goddess proud. “Howl and Screech were born in and of Delhi. They couldn’t have been made anywhere else,” says Cornish. These two were the first in an ongoing series of human-animal sculptures encouraging us to connect with nature and rediscover a sense of wildness amidst our technology saturated environment and the hum-drum routine of daily life. They join Cornish’s long-running series of ‘Pacific Sphinxes’ – smaller mythological figures which have a wonderful vitality and a startling anthropomorphic presence. Strongly animistic, they reference ancient pagan religions and celebrate the strong connections between humankind and animals. As devotional objects they affirm the presence of the divine in everyday life and invite us to reflect on the small miracles we often overlook, the undeniable presence of magic in our daily lives.