decorated with a mermaid and harnessed seahorses and fish, crimson lustre glaze highlighted with gilt on a brown-black ground, earthenware, designed by John Slater, made by Doulton & Co, Burslem, England. Impressed and printed factory marks and paper label 'John Slater Collection No.18' . Dia.400mm John Slater (1844-1914) was the Art Director at Doulton & Co Burslem from 1887 until his death in 1914 when he was succeeded by Charles Noke. Slater studied at the Stoke-on-Trent School of Design, subsequently working at Minton and Pinder, Bourne & Co, then Doulton after they acquired the company. A skilled artist he was involved in the development of many of the special glazes used by Doulton, including rouge flambe, and a number of patents relating to ceramics. During his time at Nile St, Slater built up a large collection of Doulton’s ornamental wares (both Lambeth and Burslem ware). In 1919 the majority of the collection was sold to Doulton’s Australian agent John Shorter, and is now housed in the Powerhouse Museum, Sydney. 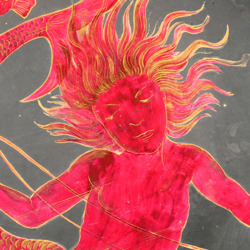