she stands on an elaborate column tending the fire of Vesta. The sacred fire of Vesta was a sacred eternal flame in ancient Rome. The Vestal Virgins, originally numbering two, later four and eventually six, were selected by lot and served for thirty years, tending the holy fire and performing other rituals connected to domestic life. H.2010mm 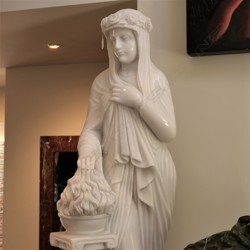